"I think Mandy is a genre unto herself." (Ric Page) 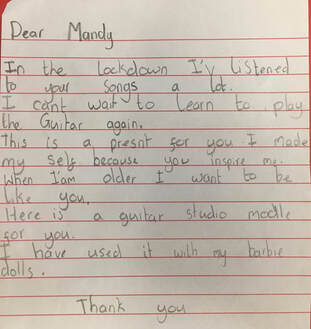 This wonderful, touching thank-you letter, which was presented to me along with a beautifully accurate model of my recording studio, is what music is all about for me – passing on to others my own love and enthusiasm for writing, singing and playing. Finding creative ways to keep passing it on in this socially distanced world has been challenging, but outcomes like this make it so very worthwhile!

Review – Mandy Woods ‘Cabin Fever’
New Album Released Monday 22nd February 2021.
Bandcamp - https://mandywoodsmusic.bandcamp.com/album/cabin-fever
Glastonbury based singer and songwriter Mandy Woods releases her new album [on 22 February 2021], aptly titled ‘Cabin Fever’, featuring fifteen songs recorded during Lockdown. A seasoned writer and performer in both Europe and America, Mandy Woods has spent most of her adult life giving in to wanderlust and crafting songs wherever she has happened to find herself on her unconventional journey, many of them telling stories - about the ups and downs of relationships, about her own and other people's struggles and quests, and about the myriad other twists of fate that have inspired her imagination.
The title track Cabin Fever opens the album telling the story of being confined inside with a loved one, which is appropriate for a Lockdown, which is followed by the gentle My Second Hand Heart with beautiful harmonica backing. This whole album has an Americana/ Folk feel to it with well crafted songs, wonderful musicianship and easy to listen to stories and you have to wonder why Mandy Woods isn’t more well known on the acoustic music scene. The up tempo One Trick Pony definitely takes on more of a Country Music sound and could easily be heard in any Bar or Honky Tonk in Nashville and even has a Yee Haa at the end to prove my point.
There are so many good songs on this album, with Cactus Rose, Butterfly, Awesome Woman and Full Moon Over Vegas being particular highlights, all telling what sound like personal real life experiences. Although all the songs feature vocals and guitar from Mandy, there is some backing with the occasional steel guitar [played by Mandy], and in All That is Left to Cherish  beautiful violin accompaniment from Judith Hooper. Ain’t No G in Country is a great fun track with has more of a band feel than the other songs. The closing track, Every Single Second, is all about making the most of life whilst you can, which is a positive message as we all hopefully prepare to come out of Lockdown. This is a really enjoyable album that is perfect listening equally on a cold Winter’s night or on a Summer’s evening under the stars, highly recommended.
The album is available from Bandcamp 22nd February.
Graham Steel
Susan (Sedona, Arizona), 14 July 2020:
I am just blown away! ... [‘Cactus Rose’] is such a beautiful song and the lyrics and music are so captivating... I love your music and your love for animals... the energy I felt after visiting your website was overwhelming.

Trades Club, Hebden Bridge, 15 October 2017:
Really inspired me last night Mandy, your songs are so well crafted and the first one [‘Before You’] could have been written for me… A real pleasure…

The Bell Folk Club, Adderbury, 5 September 2016:
Mandy’s song about a Grandmother (‘Safe in Grandma’s Arms’) was quite beautiful, but should only be sung in future if boxes of tissues are issued in advance.

Uckfield Folk & Blues Club, 14 April 2016:
And so we came to Mandy Woods. All of her songs were self-penned and her lyrics are poignant, sensitive and clever... I was reminded somehow of Buffy Sainte-Marie ... the depth and belief behind the words. An impressive performance.

From Sleeping Bag Studios’ review of Mandy’s All Along EP:
The ‘All Along (Remix)’ is wonderful. It certainly has the advantage of being an incredibly well-written song, but the additional low-end in the production and general fullness of this track is thicker, bigger, stronger. Truly though – she’s got herself a champion of a song on her hands and a real journey in acoustic folk-music here in ‘All Along’, no matter which version you choose, they both have impeccable merit and certainly a place on my stereo. Mandy’s created a really strong vibe that’s all her own and it comes through shining through the music, lyrics and smoothed-out feel of this final remix; a very smart way to end a well-written EP with the memorable impact it deserves. (http://sleepingbagstudios.ca/mandy-woods-all-along/)